Old Town is one of the most trusted brands in the kayak business – and so it should be, having launched in 1898 and survived the whole of the 20th century into the 21st. You don’t get to have that kind of history unless you know your business back to front.

There are lots of things we could tell you about Old Town Kayaks – the company has quite an impressive range, covering various propulsion methods, styles, lengths and even seat numbers.

Instead of numbing your brain with particulars of every Old Town kayak on the market though, it feels more useful to show you just a small handful of options, because they can give you a whole range of watery adventures.

Whether you’re bonding as a family, bonding as a couple, just having fun, or challenging yourself in rougher water against the power of nature. Old Town has you covered.

You might think of an Old town kayak as an unnecessary expense, but once you’ve bought one, it will become the highlight of your camping trips.

Heck, in all likelihood it will become the reason for more camping trips, because having an Old Town or two along for the ride opens up nature and water for you in whole new ways that you can’t guess at yet.

Let’s start with something gentle…

The 10 Vapor Recreational is a single-seater kayak for those who may be new to the water, and who, for instance, aren’t comfortable yet with a two-person kayak in company.

Ideally suited for gentler waters like ponds and lakes, it’s built of things like single-layer polyethylene, which will give you the durability you may need as a newcomer to the way of kayaks and their occasional cussedness.

Given that cussedness, it’s also a blessing that the Vapor is relatively stable. Again, if you’re quite new – or even brand new – to the water, the last thing you want to worry about is overturning the kayak, and the Vapor has the air of a kayaking kindergarten teacher.

It will gently help you achieve your goals, without going out of its way to scare you.

Its seat is both padded and adjustable, so it welcomes you in, and its cockpit ring gives you a place to hold your paddle when it’s not in use.

Thigh and knee pads help cushion you while you paddle, and adjustable foot braces will keep you secure, to increase your sense of security while you row.

In case you’re a kayak newcomer with a sweetly cocky attitude, the Vapor has a cup holder, so you can bring along a beverage of your choice and just chill in the wonder of watery nature.

It also comes with enough storage space to keep all your land-based essentials safe and dry while you find a new way to breathe and be.

And while it’s not the lightest kayak on the market, at 53 pounds, it’s hardly going to weigh you or your car down, and that little bit of extra weight will translate into easier steering for the newcomer to the water.

You can tell from the name that we’re not in beginner territory anymore. The Sportsman 106 motorized fighting kayak is for those who take to the water with one aim in mind – fish, fish, and more fish.

You can actually get several varieties of the Sportsman 106, but the version powered by Minn Kota gives you much more range than most. You can even use the Minn Kota Sportsman 106 at sea if the fancy takes you and you have the wherewithal to get safely back to shore.

That’s because the Minn Kota is a powerful 12-volt motor with a thrust of 45 pounds. That gives you far more power than you would ordinarily get from your own rowing alone, so it expands your fishing horizons almost exponentially.

The floor of the 106 is covered in cushioned pads, to give you better grip and comfort on your fishing trip, along with a tackle box and some fishing rod holders. It even comes with a universal transducer mount where you can put your fish finder.

Adjustable foot braces are transplanted from the recreational kayak to the sporting version, and you also get a double layer of Textilene mesh on the seat to help you stay comfortable through a whole day’s fishing.

The Sportsman 106 is 10 feet 6 inches long and has a maximum load capacity of 525 pounds, so not only can it transport you and all your necessary gear – there’s plenty of weight tolerance left for lots of fish too!

We mentioned you could get the Sportsman 106 in a number of different versions. The pedal-powered one is an interesting variation on the theme of a fishing kayak, in that it allows you the gentle approach on the fishing stocks that a pedal kayak suggests.

With a pontoon-style hull, you can easily maneuver the PDL 106 backwards or forwards mostly by pedal power alone. What does that mean? It means you can get a more or less hands-free fishing experience.

Like its more aggressive motor-powered version, the 106 PDL has everything you could need for an extended fishing trip – cushioned floor pads, tackle box, transducer mounting system – you name it, it’s here.

All except the motor that took you out into rougher waters. The 106 PDL is more or less a halfway point between the calmness of the Vapor and the aggression of the 106 Minn Kota.

While it’s the same length as the motor-powered version, interestingly, you have a slightly reduced maximum load weight in the PDL version – just 450 pounds.

The legacy of Old Town – and its present

While Old Town has a much wider variety of kayak than these three options, what you can see from these examples is the dedication of the brand to deliver on the potential of the particular kind of kayaking that each type of user wants, in order to get the most out of their purchase and their experience in the wet wild. 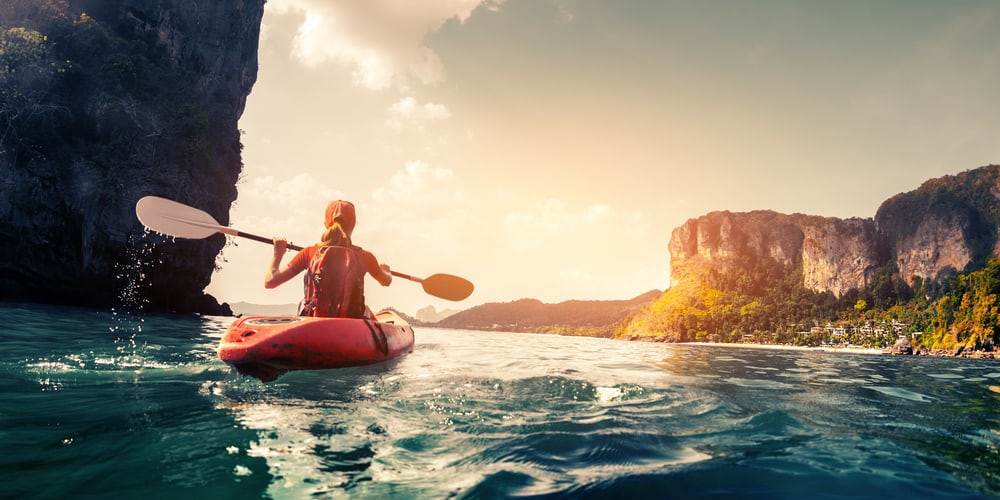 If you have no idea what kind of kayaker you are, chances are you’re a beginner, with no sense as yet of what being out on the water means to you.

If that’s the case, the Vapor is a great introductory kayak – it won’t scare you, it will keep you safe, and let you grow accustomed to the very idea of being on the water under your own power and direction.

There will, in time, be other questions to consider, and Old Town has a kayak that answers them all. Whether you want a kayak that involves you sitting in the boat, or on the top of it, for instance.

Usually, taller people go for the sit on top option, like the Sportsman 106 PDL.  Shorter people – and beginners – tend to favor the likes of the Vapor, where you sit inside the kayak somewhat more protected from the elements and also less susceptible to rolling the kayak with any body movements.

These, like the relatively new Castine series from Old Town, are longer and narrower than recreational kayaks, so they can move faster through the water, and usually come with leg and thigh braces to help you maneuver in more challenging waters than the recreational kayaks ever see.

Are you a daredevil or a chill-out zone with legs? Either way, Old Town has been catering to the needs of kayakers for long enough to have something to suit you perfectly.

As you’ve seen, there are also different ways of powering your kayak, from personal paddle power to foot pedals, to impressive 12-volt motors that can turn your standard kayak into something fit for at least some level of seaworthiness.

As with the other questions about which type of kayak you want, these are decisions that will come to you over time – and by the time they arise, you’ll probably have an instinctive answer to them.

Bottom line, whatever kayak is calling you, both now and as you get more and more experienced and potentially adventurous, Old Town is a brand with a history of making kayakers happy.

It has a history of delivering kayaks that speak to every watergoer’s needs – whether or not they entirely know what they are.

But just because it has a longer history in the kayak business than many of its competitors, that doesn’t mean it’s stuck in the past. Far from it.

With modern plastics for kayak durability, to modern designs and embracing the likes of the motor kayak, it’s a company that is determined to innovate to stay relevant – just as it did in previous generations, which after all is why it’s still around.

And why it will have the kayak of your needs today, and the kayak to serve you when you work out how your needs have changed, years from now.