As much as we all love the opportunity to make our lives easier, the term “foldable kayak” doesn't exactly sound right.

Rather than conjuring up images of a space-saving, portable, origami-inspired but water-ready kayak, the picture that comes to mind is of a paper boat gradually sinking beneath the waves. At least, that’s what “foldable kayak” used to mean.

Oru is a company that claims to make the foldable kayak a realistic replacement for the hard shelled heavyweight.

These are kayaks designed for the enthusiast, able to stand up to regular usage and moving waters. Oru claims to make a foldable kayak that actually works.

If you’re thinking of buying an origami kayak, then you have to consider the Oru brand. In this review, we take a look at everything that makes these kayaks special, and what they’re like on the water.

What is the Oru Kayak?

Each Oru Kayak is made from a single sheet of corrugated plastic, folded down into a shape that you can easily carry in one hand.

When you reach the water, all you need to do is unfold the kayak and clip the folds into place. At the end of your trip, the kayak can be folded back up, and stored in a closet.

The idea behind Oru was to create a portable kayak that actually worked on the water, but was also easy to travel with. Lighter than a rotomolded kayak, but sturdier than an inflatable kayak, the foldable kayak is intended to be the best of both worlds.

There was obviously a waiting market for the foldable kayak — Oru began as a Kickstarter project, which gained funding almost as soon as the listing went up.

The original design has proved popular, so much so that the company has been able to expand the range. There are currently five Oru kayak models available.

The Oru Kayak looks fairly simple. The designs are plain, and there’s no variety of colors. There’s also no paddle included, and the convenient foldable Oru paddle must be bought separately.

However, Oru kayaks are more special than they initially look. The easy transportation of the foldable kayak is matched by its movement on the water. For flexible kayak owners, the Oru might be just what you’re looking for.

The Bay ST is the original Oru Kayak, the innovative design that launched the brand. This is a performance kayak, able to handle choppy waters and calm lakes, and everything in between.

The Bay ST exemplifies everything that’s great about Oru. Assembly takes just 10 minutes, and the end result is a sturdy kayak able to hold up to 300 pounds.

Collapsed, the kayak weighs only 26, making it easily transportable for reaching those backcountry waters.

One real plus to the brand, and the Bay ST in particular, is that they aren’t afraid to make changes. The Bay ST has become stronger and sleeker, with the design tweaked due to customer feedback. The Bay ST has gone from being a workable novelty, to an impressive performance kayak.

With the Beach LT, Oru have created a kayak that’s perfect for day trips with friends and casual exploration.

A recreational kayak that’s suited for calm waters, at 12 feet long the tracking is fantastic and beginners will appreciate the level of control.

Wide with a flat bottom, the Oru Beach LT feels stable in the water. The speed isn’t fantastic, but you might be surprised at how well this lightweight kayak cuts through the water. It’s also easy to paddle, and the gliding shape means less effort is required.

The Haven is the first tandem kayak from Oru, although it can also be converted into a single. This large recreational kayak is designed for lazy river trips with a loved one, where the slow movement of the large shape only adds to a pleasant day out.

The tandem kayak obviously comes with some disadvantages that are inherent to a larger foldable design. It can take a while to put up, with even the experts at Oru needing 15 minutes to assemble the Haven.

In order to accommodate the extra weight capacity (the Haven can hold 500 pounds), the base kayak itself has to weigh more. 41 pounds may be small compared to a rotomolded kayak, but it’s still not exactly light.

However, compared to an inflatable tandem, the Haven feels stable in the water. Easy to paddle, two beginners should quickly get to grips with the movement of the kayak.

Oru have shown that they aren’t afraid to update. The Haven TT might not be perfect right now, but hopefully future releases will improve the frustrations.

The compact Inlet is the smallest of the Oru models, designed for recreational use on calm waters.

At less than 10 feet long, it can be assembled in roughly 3 minutes, leaving you more time to spend actually in the kayak. With a comfortable seat pad and adjustable backrest, it’s easy to enjoy hours in the Inlet.

The Inlet weighs only 2 pounds, but can support a weight of 275 pounds, making it an ideal single person kayak.

For those who make every moment count, the Inlet presents a fantastic opportunity to spend time exploring — not waste time setting up.

As a lightweight kayak, the Inlet is best used on calm waters, and isn’t advised for sea kayaking. Tracking is good, but there’s a slight lack of control.

However, once you’re winding down a lazy river just minutes after setting up, you won’t notice any problems at all.

With the Coast XT, Oru have created their most versatile kayak yet. Designed to handle rugged waters, heavier winds, and increased waves, the Coast XT is a performance kayak that advanced users will enjoy taking control of.

The Coast XT is efficient in the water, using the longer shape to improve speed. With ample storage room, this is a kayak for long adventures, exploring backcountry waters and even heading out to the ocean.

Despite that, the Coast XT still isn’t a heavy kayak. At 32 pounds it may not be a featherweight, but most shouldn’t struggle with assembly and movement.

Serious kayak users may find it lacks some control and stability found in a molded kayak. But for the portability, the small sacrifice is worth it.

Is It Really Easy To Build An Oru Kayak?

As intriguing as an origami kayak sounds, the reality is that it’s only as good as the fold.

When initially presented with the Oru kayak, it might seem intimidating. Expect that initial build to take longer than assumed, while you get a handle on the movement. Have a go at setting the kayak up before you take it out for the first time.

However, once you’ve got the hang of it, assembling an Oru kayak is easy. Everything snaps into place well, the folds become intuitive, and it wastes less energy than an inflatable.

Folding it back up is both a little easier, and a little harder. Refolding feels intuitive, with the sides snapping together to quickly collapse the large design. However, by this point in the day, your arms are likely to be getting tired. Having to push the sides back into place can really take it out of you.

No one wants to end a nice day cruising down the water by getting into an argument with a foldable kayak, so you may prefer to leave it unfolded to take home. 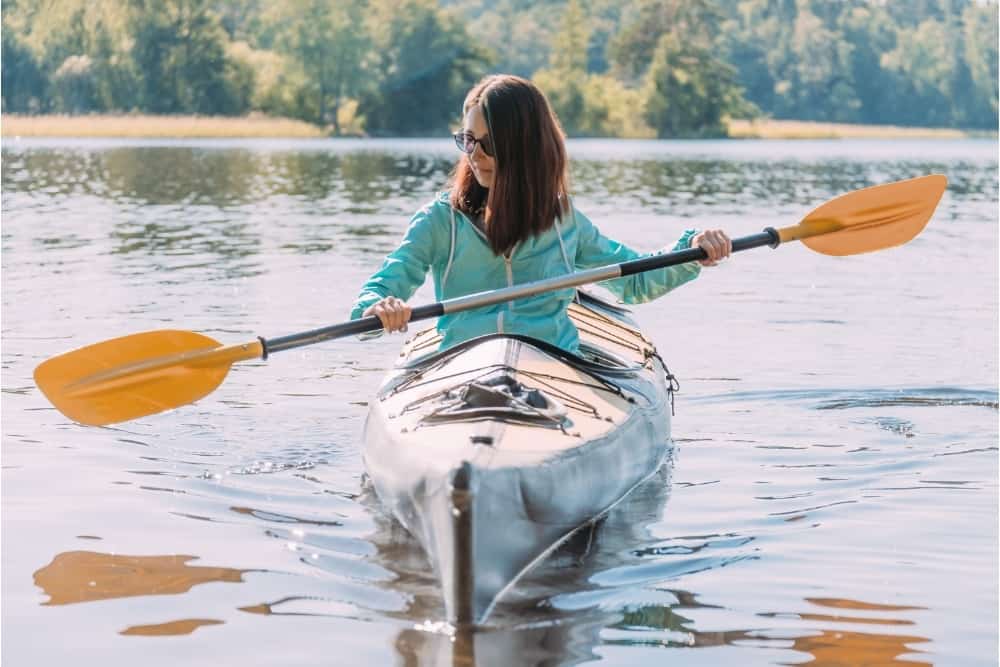 The difficulty of a foldable kayak is balancing portability with stability. Oru have done a decent job at creating a foldable kayak that moves well, and doesn’t feel like it’s going to tip you out.

When you first look at an Oru sitting on calm water, it might not look like much. But as you move to step in, it becomes clear that the design really does work. Stable, with a good speed and controllable movement, they’re a delight to use.

Serious yakkers who want to tackle serious waters may find the Oru lacks some control and speed. However, casual enthusiasts will find a lot to love.

Who Should Consider An Oru Kayak?

Oru have taken a simple idea - a foldable kayak - and made it work. These lightweight crafts are quick to assemble, and portable. Most importantly, they’re good on the water. An intelligent design lends them stability and control, without adding weight.

The Oru kayak is perfect for someone who finds they rarely have time to explore. The portability is a real plus, as this is a kayak that can be taken on public transport. It even fits into airplanes, so your kayak can accompany all your adventures.

An Oru kayak will come with a higher price tag than an equivalent size inflatable kayak, but their versatility makes up for the price. This is, perhaps, one of the smartest kayaks on the market.