If you’ve bought a wetsuit, there’s a good chance you’ve heard of Body Glove. In fact, they’re often described as the original inventors of the wetsuit (although this is a surprisingly heated discussion). Either way, Body Glove and wetsuits are practically synonymous.

With the Performer 11, Body Glove branched away from wetsuits, and into the world of inflatable stand-up paddle-boards. Admittedly, the two worlds share a significant overlap.

But we all know that being good at one thing doesn’t automatically make you good at another. And while Body Glove might be fantastic at wetsuits, an ISUP is a whole different design.

But the Performer 11 is an intelligently crafted paddleboard. Body Glove have used their experience in the water to build an ISUP that goes beyond expectations, and could become one of the best around. In this review, we take a look at everything that makes it great.

What Is The Body Glove Performer 11?

Body Glove is a brand best known for wetsuits. Ever since being founded by twins Bill and Bob Meistrell in 1953, Body Glove has been at the forefront of wetsuit technology. Having dominated that market so completely, an expansion into other water sports equipment was inevitable.

Which is where the Performer 11 comes in. The Performer 11 is an ISUP — Inflatable Stand-Up Paddle Board. And it’s one of the most popular ISUPs on the market.

Created by a brand that really understands a life spent on (and in) the water, the first Body Glove Performer released in 2016 proved to be a solid design.

However, Body Glove is also a brand that always looks for ways to innovate. Since the initial release, the Body Glove Performer 11 has undergone several improvements. Now the ISUP is back, and better than ever — at least, that’s what Body Glove claims.

The new Body Glove Performer 11 has an advanced design, a new look, and a host of accessories. Included with the ISUP itself is:

The Design And Build Of the Body Glove Performer 11

The initial impression of the Body Glove Performer 11 is that it looks good. The design is sleek and stylish, not plain but not eye-searingly bold either. If you wanted to buy an ISUP based entirely on looks, then the Performer 11 would be a solid choice.

But we’ve probably all had some experience with an ISUP that looks much better than it performs. So, beyond the printed design, how good is the build of the Performer 11? 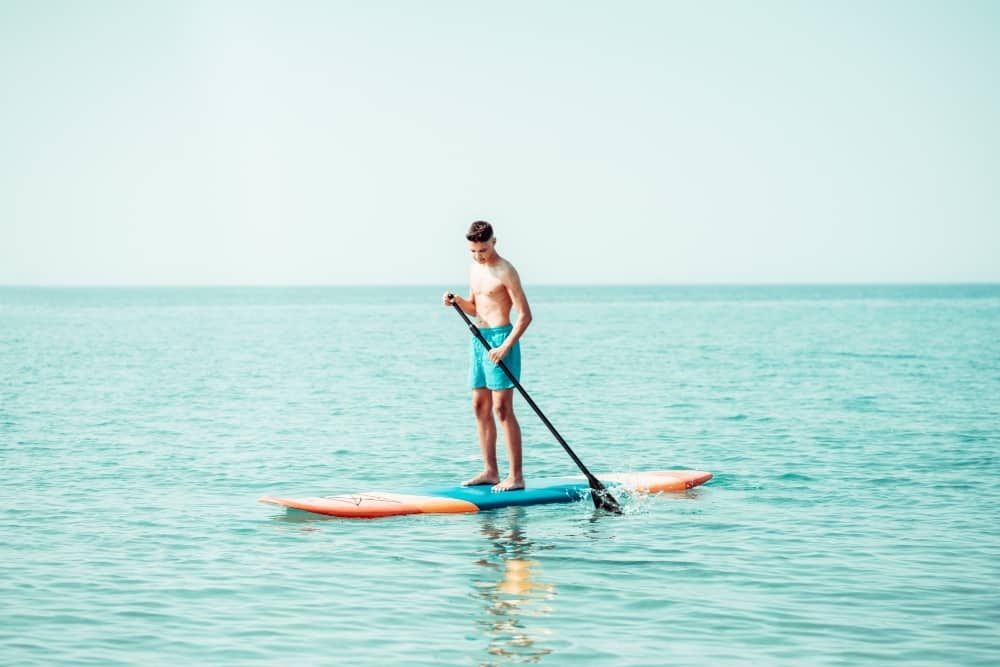 Inflatable paddleboards can feel unsteady, but the brilliance of the Performer 11 is the durability of the materials. Triple-layer PVC construction makes the craft rigid, and navigates that awkward feeling of sinking in the middle.

The strength is improved by the triple-layer side rails, which give the paddleboard a firm shape. A lengthwise carbon stringer adds stiffness to the board, bringing you a design that feels stable under the feet.

The Body Glove Performer 11 has a slightly unusual shape for a touring ISUP. The sharp nose helps it to slice through the water, and aids versatility. It might cause issues with sudden waves, but the pointed nose can adapt to different situations.

But flip the board over, and you find one of the main issues with the Performer 11. The base has 3 small fins, with an increased surface area from previous designs.

However, there’s no central tracking fin, which feels like an oversight. The fins are also fixed, and can’t be replaced. Frustrating if you want to switch them out, and aggravating should they break.

That said, the fins are durable, with a flexibility that makes them unlikely to snap.

Body Glove hasn't forgotten to include the additional features that make an ISUP functional. There’s bungee cords on the front, for strapping down what you need when you’re on the water.

Set just ahead of them is an improved camera mount. And there are also two D-rings, which is fewer than some SUP, but enough to get the job done.

The handle initially seems simple, but it actually has some pretty handy (pun intended) features. It can be used as a water bottle holder, and you can wrap the paddle in the handle to make carrying that much easier. There is only one handle, but it works so well you won’t feel it’s a loss.

How does the Body Glove ISUP perform?

The Body Glove Performer 11 definitely passes the design test, but what’s it like out on the water?

The stability of the Performer 11 is aided by the width. At 34 inches, it’s pretty wide for a single person paddleboard. That means it feels solid, even under heavier bodies.

For a beginner, this is particularly useful. It gives you room for movement, without feeling like you’re about to tip off the board.

It isn’t just the width that makes the Performer 11 stable. The triple-layer side rails are rigid, providing the ISUP with a consistent shape.

The Body Glove Performer 11 can be inflated up to 15 PSI, and it’s worth pumping to at least 13. This will give the paddleboard a thickness and strength that you can feel supporting you.

At 11’ long, the Performer 11 is a sizable ISUP. That can make movement difficult, as you have to control the bulk of the board. As a long and wide design, the Performer 11 may not be the best choice for young children, or first time paddlers.

However, the maneuverability is still decent, especially with the help of the pointed nose. The tapered shape of the board does help it to cut through water.

Performer 11 also comes with a collapsible paddle. The lightweight design looks good, and it works at controlling the board. With a maximum length of 85 inches, it’s a workable size.

Without that large central fin, you might expect tracking on the Performer 11 to be bad. And honestly, this is the area that lets the ISUP down most. With an unusual shape, a wide center, and small fins, tracking definitely isn’t the stand-out feature of the Performer 11.

The tapered nose does make up for the lack of central fin slightly, and tracking isn’t awful. But if you wanted an SUP specifically for touring, then the Performer 11 shouldn’t be your first choice.

There’s a surprising speed to the Body Glove Performer 11. At least, it’s fast for an all around ISUP. The bulky shape does slow it down slightly, but a lower weight combined with the sharp nose gets things moving.

The Body Glove Performer 11 is a decent price, even if it’s not a budget option. But when you consider the quality of the build, it’s hard to complain about the cost.

There’s a definite durability to the materials, so if cared for correctly, this could be an ISUP that lasts for a long time.

The price is made better when you consider that you really do get the full package from Body Glove. And that doesn’t just mean the items in the bag. Yes, it’s fantastic that the Performer 11 includes a paddle, dry bag, and carry case.

But it also comes with a huge range of uses. The stable base and gliding design make it a paddleboard for adventure and leisure.

But if the price feels like a sticking point, then it’s worth keeping an eye out for sales. Body Glove has been known to offer discounts. And if they release another upgrade, you might find some older designs at a lower cost.

Should you get a Body Glove Performer 11?

The Body Glove Performer 11 is an inflatable stand-up paddleboard with something to suit almost everyone. The wide base gives it a stability to support up to 320lbs, making it a fantastic option for families and single paddlers.

The extra stability means you won’t be clinging on when kids or furry friends find they just can’t sit still. But the pointed nose and lightweight provides a surprising speed when you want to get away from it all (see the aforementioned kids and furry friends).

There are some areas where the Performer 11 could be improved. Without the large central fin, tracking is lacking.

In future designs, it would be good to see Body Glove make the fins replaceable, so you can choose your own. The handle is intelligently designed, and it’s a shame there’s only one.

But all the negatives are small compared to the overwhelming positives. The Body Glove Performer 11 looks good, feels good, and adapts to different conditions. A likeable design that can take you almost anywhere.